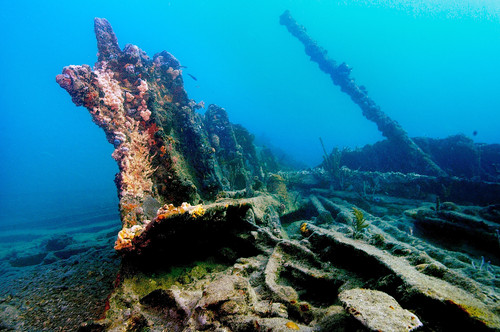 Just offshore they wait, hoarding their secrets, some perhaps for centuries.

They convey a salty whiff of romance, high adventure and, however exaggerated in popular imagination, a lust for sunken treasure.

These are the shipwrecks whose remains lie scattered like busted skeletons on the sea floor off South Florida. In Broward County, officials aim to locate and chart their number, which they say could top 30, but any treasure they tally will be in terms of the wrecks’ cultural, historical and recreational value.

“You’ve got a whole cross-section of Florida maritime history out there off the beach,” said state underwater archaeologist Roger Smith. “There’s anything from colonial shipwrecks all the way to modern vessels.”

Water-logged calling cards from the past, Broward’s shipwrecks include a pre-Civil War slave trader and, reportedly, a World War II Nazi submarine sunk in combat.

There’ve been accounts of handcuffs found offshore, possibly from a slave ship. One such vessel, the American barque Thales, bound for West Africa to collect its cargo of misery, was driven onshore near Hillsboro Inlet in Pompano Beach during a storm in 1858. The crew abandoned ship, caught another boat to Key West, and Seminole Indians ransacked the vessel.

One much-discussed wreck, whose existence or location has never been officially confirmed, was a German U-boat said to be caught on the surface by Navy fighter planes in December 1942. The story has the planes sinking the sub in 380 feet several miles off Dania Beach.

Smith and local historians have organized a group of about 20 private divers, researchers, history buffs and yes, treasure hunters, to donate time, skill and equipment to the survey this summer.

Broward’s historic preservation officer, Christopher Eck, last week won initial approval for a $50,000 state grant to help fund the multi-year project. Another $100,000 — half in county money and half in donated labor and equipment from private individuals — will be channeled to the survey.

Only three other areas in the state, St. Augustine, the Keys and Pensacola, have conducted such a shipwreck inventory. Eck plans to hire a fulltime underwater archaeologist to study old newspaper articles and shipping and insurance records, then select sites most likely to contain shipwrecks. Homegrown maritime lore also factors in.

“There are a lot of local fishermen and divers who have knowledge over years of sites that haven’t been recorded,” Eck said.

Once potential sites are chosen, volunteers will “mow the lawn,” or tow a magnetometer across the surface in a tight pattern. The instrument detects magnetic fields of metal. With strong indications of a sunken vessel, divers would descend. Wrecks would be mapped, photographed and charted.

The surveyors hope to publish their findings in brochures and government websites. They envision videos, lectures and museum exhibits. The exposure could lure recreational divers to the sites. “We want people to appreciate the history,” Eck said.

Shipwrecks can generate tourist dollars. “Historical preservation has been recognized as something that does a lot of good for the state of Florida’s economy,” Eck said.

Locals and tourists already dive on Florida’s 10 official “shipwreck preserves” around the state, underwater sites of doomed vessels with bronze plaques and mooring buoys. Three are in South Florida: the SS Copenhagen, the Half Moon and the Lofthus.

The Copenhagen was a 325-foot steamship hauling coal from Philadelphia to Havana when in May 1900 it crashed onto a reef about a mile offshore present-day Pompano Beach. Much of its steel hull has fallen apart and now, about 30 feet under, has become part of the reef.

The Half Moon was a 154-foot long racing sailboat built for German nobility and seized as a war prize when it visited England as World War I was declared in 1914. The lavishly furnished yacht was resold, sunk, and eventually moored off Miami as a cabaret during Prohibition. A 1930 storm smashed it onto a sandy shoal just off Bear Cut on Key Biscayne, where it now remains under 10 feet of water.

The Lofthus was a 222-foot barque with false gunports painted along its steel hull to frighten Sumatran pirates. Carrying lumber from Pensacola to Buenos Aires, a storm blew it off course in the Strait of Florida. It wrecked off what is now Boynton Beach in early 1898 and rests in about 20 feet.

Wrecks of similar significance may well await. “You never know what’s out there,” Smith said.

In days past, ships were the semi-trucks of the time, ferrying goods and raw materials great distances, especially along the U.S. East Coast. Ships on the northbound run exploited the Gulf Stream, which flows in that direction. Southbound vessels, especially those under sail, stayed close to shore to avoid the Gulf Stream. Sometimes they sailed too close.

“A hell of a lot of ships that were hugging the shore going south … were lost right along the beach,” said Ray McAllister, 82, Lighthouse Point. A professor emeritus of ocean engineering at Florida Atlantic University, the 54-year veteran diver estimates he has investigated some 140 shipwrecks in Florida and around the world.

Most wrecks off Broward are buried in sand as a result of storms, or nothing more than scattered debris on the bottom, McAllister said. “All you see is shards and bits and pieces,” he said. “I wish we could find one that wasn’t so badly broken up.”

While historically valuable, the lost ships always offer a slim chance of rich historical prizes like those McAllister has found in more exotic locales.

Bruce White, a diver from Pompano Beach is co-founder of the nonprofit Marine Archaelogical Research & Conservation, a group which is expected to volunteer time and equipment to the survey, has also examined more wrecks than he can count.

“What we bring is archaeological responsibility, a focus on the cultural resource,” White said. “There are people out there who are kind of `treasure hunterly.’ We stand as the antithesis of that.”

Whatever surveyors find on the bottom is automatically the property of the state. To remove anything is theft, Eck said. Besides, profit is not a factor.

“We’re not looking for treasure, it’s anathema to the underwater archaeologist,” said McAllister. “To even mention treasure, you’re a pariah … but it could always happen.”

More information about the shipwreck survey program is available at 954-765-4671.