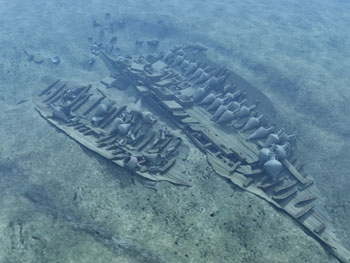 Archaeologists are bringing past worlds vividly to life on the computer screen. But are the high-tech graphics helping science, or are they just pretty pictures? Michael Bawaya takes a look.

There’s more than one way to sink a ship, as Donald Sanders knows. President of the Institute for the Visualization of History in Williamstown, Massachusetts, Sanders spends a lot of his time repeatedly sinking a vessel off the coast of Cyprus.

The ship isn’t real — it’s a computer model of a vessel that sank in the fourth century BC. Sanders is trying to recreate what happened when the ship went down, leaving nearly 500 intact amphorae, or storage vessels, to be found centuries later on the sea floor. By loading his ship with a virtual crew and cargo, then sinking it in a number of different potential disasters, Sanders hopes to find a sequence of events that closely matches the archaeological evidence, and so work out might have happened centuries ago.

His project, which should be completed later this year, is just one example in the growing field of virtual archaeology. It is a highly visual way to recreate lost worlds, helping researchers to imagine environments long past. Since the field emerged in the early 1990s, archaeologists have created a number of virtual sites, including Pompeii and the tomb of Nefertiti.

Virtual archaeology can recreate individual objects, such as a hand axe, or entire sites and landscapes, such as Stonehenge — an ambitious project that took six months to complete. The possibilities of the technology are enormous, says Jeff Clark, director of the Archaeology Technologies Laboratory at North Dakota State University in Fargo. “Virtual archaeology” can allow us to explore ideas in ways that are otherwise not possible,” he says.

Sometimes, it may seem a bit too real. The technology is so impressive that it can eclipse the importance of the models, as users navigate their way through elaborately designed palaces or villages. Sarah Kenderdine, an archaeologist and curator at Museum Victoria in Melbourne, Australia, says some academics regard virtual heritage work as “kitsch and consumerist” rather than scientific and educational.

But even if the models do resemble a video game, they can also offer an unparalleled entry point into a vanished world, providing new and unexpected insight. For instance, a three-dimensional representation of Rome’s Colosseum, created several years ago by a team at the University of California, Los Angeles, has shown researchers just how cramped some of the upper hallways really were — confounding their expectations.

Key to the new insights are technologies that let archaeologists peer into obscured artefacts and document landscapes in great detail. Computed-tomography scans of Egyptian mummies, for instance, can reveal internal structures nonintrusively. Laser and computed-tomography scans of rare and fragile human remains or artefacts produce three-dimensional models that can be measured and analysed in a way that real objects cannot. Some archaeologists are even taking the technology into the field, armed with laser scanners to create three-dimensional replicas of their findings as the excavation progresses.

Such data are then fed into a modelling or drawing program, and displayed on the Internet. Researchers who live thousands of miles away, or theoretically years in the future, can then access these items.

It sounds expensive, but it doesn’t have to be, says Robert Stone, director of the Human Interface Technologies Team at the University of Birmingham, UK. Early virtual reconstructions were powered by supercomputers that cost hundreds of thousands of dollars. Today, he says, experts can achieve the same effects, and more, with a standard desktop computer. But software remains expensive; Sanders, for instance, spent nearly US$30,000 on the programs he uses to sink his virtual ship.

The time spent working on such projects can also increase the cost. At Sanders’ Massachusetts laboratory, projects run the gamut from individual objects, such as a small model of an ancient Egyptian ship that might take a day to complete, to entire building complexes, such as a ninth-century-BC Assyrian palace with hundreds of rooms, which could take a year to finish. The former might cost a few thousand dollars, whereas the palace could run into hundreds of thousands. “Doing virtual reality is becoming easier,” he says, “but it still requires computer-modelling skills, data-interpretation skills and some programming to get it right.”

In many cases, it also takes an interdisciplinary team that includes archaeologists, architects, art historians, programmers and graphic modellers. And they must be trained to understand the cultural importance of their work, says Maurizio Forte, an archaeologist at the Institute of Technologies Applied to Cultural Heritage in Rome, Italy. “Technology is only a tool,” he says. “The method is the core.”

Despite its capabilities, virtual archaeology has been slow to catch on. Sanders estimates that currently 80–100 projects are under way at any one time. Western Europe is the most generous funder of such research. Kenderdine, in Australia, taps into European sources to fund worldwide projects such as her recreation of the ancient Cambodian city of Angkor.

At the museum in Melbourne, visitors can experience Kenderdine’s work inside a ‘virtual room’, an octagonal laboratory with panoramas displayed on the walls. The images aren’t computer-generated, but are stereographic, high-resolution photographs. The idea is for visitors to be immersed in the ruins of Angkor, as if they were actually there.

Such detailed recreation requires considerable research. A virtual model must be geometrically complete, says Elizabeth Riorden, a researcher at the University of Cincinnati, Ohio, who works on virtual reconstructions of the site believed to be the ancient city of Troy. “But we often have very incomplete knowledge of an archaeological site,” she says. So researchers may be forced to resort to educated guesswork.

Some archaeologists are sceptical because they don’t understand the methods and assumptions used to create models, says Sanders. And there are currently no generally accepted guidelines. A February 2006 conference at King’s College London aimed to address the issue of transparency. For the first time, virtual-heritage experts agreed to draft specific guidelines for documenting the creation of virtual models. These might, for instance, tell the viewer that 75% of a model was built using data from the archaeological record, and the rest was based on assumptions.

However it is created, a virtual model may end up looking so realistic that, as Clark notes, “it imparts a sense of truth that in fact does not exist”. Some virtual models could be partly accurate and partly not because one portion is based on abundant archaeological information whereas another portion is based on conjecture. “If you really try to get the visual simulation as accurate as possible, you must research the nitty-gritty details,” he says.

Most researchers agree that the technology is making archaeology more accessible to the public, as models are featured in museums and television documentaries. Displays can be posted on the Internet, in visitors’ centres and in schools. Archaeologists may in fact be the hardest to bring around. “Multidisciplinary communities embrace virtual archaeology as a key part of their research,” says Forte. “Traditional archaeologists are still very conservative and think virtual archaeology is a game.”

The cost and complexity of the work may keep some researchers away. One of virtual archaeology’s grand ambitions, says Sanders, is “to recreate the past in all its complexity, with people, animals, climate, vegetation and the ability of the scene to change and adapt to external conditions”. And the more detail needed, the greater the technical and financial demands (see ‘Recreating ancient life’). “George Lucas could probably do it if he wanted to,” he says.

But the evolution of video-game technology is helping virtual archaeology develop, says Stone. He recently gave his undergraduates the task of creating three-dimensional virtual models, complete with animation. Although none of the students is an experienced programmer, they used gaming software to make impressive models — ranging from an Afghan village with blowing sand and swaying trees, to an underwater wreck replete with marine life. It may be that virtual archaeology won’t need someone like George Lucas after all.