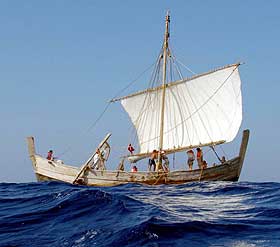 The Uluburun II, which is on display in Bodrum, started to be built in 2004 using late Bronze Age techniques and set sail in 2005

A replica of the oldest known shipwreck, Uluburun II, built by the 360 Degree Historical Research Association in Urla, İzmir, arrived in Bodrum on Monday for display as part of activities marking the 80th anniversary of Cabotage Day.

Previously the ship had anchored in Istanbul, Marmaris, Cyprus and Kaş readying for the Cabotage Day celebrations, a maritime festival that commemorates the establishment of Turkey’s sea borders and celebrated annually on July 1, reported the Anatolia news agency.

The Uluburun II, which is on display in Bodrum and sponsored by the Bodrum Peninsula Promotion Foundation started to be built in 2004 using late Bronze Age techniques and was launched in 2005.

A photography exhibition featuring images from the ship’s voyages opened at the Bodrum Underwater Archaeology Museum accompanied by a documentary screening.

Following a one-month stay in Bodrum, the ship will set sail for Greece’s İstanköy and Kilimli islands, aiming to promote Turkey and its underwater archeological wealth.

Archaeologist Osman Erkurt, who is also the ship’s captain, said: “Our main difficulty is finding sponsors for voyages. Sometimes we only had YTL 10 when we set sail.”

The Uluburun sank in the 14th century 8.5 kilometers southeast of Kaş in Uluburun Bay while carrying copper and tin from Alexandria to Crete. It was discovered in 1982 by a diver.

The remains of the shipwreck were unearthed by an excavation team consisting of archaeologists and divers and the process has lasted over 20 years.

Considered to be one of the most significant archaeological finds of the 20th century, the 3,300-year-old Uluburun took its place in history as the oldest commercial vessel while the artifacts — including a 3,300-year-old seal believed to belong to Egyptian Queen Nefertiti, a huge amphora and jewelry — excavated from the shipwreck excited science and archeology circles.

The artifacts discovered in the Uluburun shipwreck are still on display at the Bodrum Underwater Archaeology Museum.