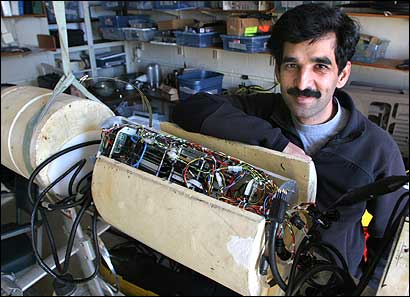 His robots dive deep for treasure

WOODS HOLE — Last summer, Hanumant Singh went on a 13-day Aegean Sea cruise — but he wasn’t vacationing. With a team of American and Greek scientists, Singh was launching a swimming robot 250 feet underwater to photograph an ancient Greek shipwreck

Or, to put it another way, he was dropping $250,000 and five years of his life into hundreds of feet of rolling waves — over and over again.

”There’s no cable, there’s no person. You throw it over the side; you pray it comes back,” said Singh, 39. ”If it gets lost, you’re having a really bad day. You hope that never happens to you.”

So far, luck — and skill — have been on his side. Singh’s unmanned submersibles — sleek, light, relatively inexpensive vehicles that fly untethered deep underwater — have brought loads of information safely back to their mother ship.

With deep-water dives and lightning-quick documentation, the latest-generation vehicles are helping transform underwater archeology: They survey large sites in just two days and dive far deeper than almost all human divers — meaning they can study many more sites and more archaeologists can analyze the data.

But Singh’s good luck may have been in the stars long before he was even born. The monkey god at whose temple Singh’s mother made a wish probably wouldn’t have it any other way.

”My mom went to the temple because she had two daughters and she wanted a son,” said Singh, recounting her trip almost 40 years ago to a holy place in his hometown of Allahabad, in northern India. ”She said, ‘If you give me a son I’ll name him after you.’ ” And that’s how came he to be named Hanumant, after the monkey god Hanuman in the Hindu pantheon.

Singh came to the United States for college, attending George Mason University, and after his junior year he went to Woods Hole Oceanographic Institution for a summer internship; he never looked back. He did his PhD at the Massachusetts Institute of Technology/WHOI Joint Program in Oceanography/Applied Ocean Science and Engineering and his postdoctoral work at Woods Hole as well. He is now on staff. ”Typical academic incest,” he joked.

Maybe, but that doesn’t mean he hasn’t proved his worth. In a small lab next door to the workshop where Alvin, the submersible that explored the Titanic, is being refurbished, Singh and his team are now integrating new sensors and adding other capabilities to the yellow Seabed submersible — the one from the Greek trip — for another year of expeditions.

Singh’s specialty is underwater imaging, which means he develops programs to deal with light’s inability to travel well underwater. Singh’s programs make the pictures Seabed takes true color and then stitch thousands of close-up shots of Greek amphorae or a dead whale carcass into one vivid photo.

Scientists in diverse fields are taking advantage of this amazing technology, as well as Seabed’s other abilities. In May, Singh is collaborating with biologists off Newport, Oregon, to study the state of fisheries there; In June, he’s going back to Greece for more archaeological work.

But walking with him recently from the village of Woods Hole back to his office, Singh’s thoughts jump to what may be his most thrilling expedition to date: In October, he will take his two new submersibles, Jaguar and Puma, to the Arctic for an expedition on an icebreaker ship. The vehicles will travel under the ice for engineering tests to prepare for 2007’s mission: searching for hydrothermal vents — the strange worlds where odd life forms live off chemicals, not sunlight — at the bottom of the Arctic’s icy waters.

No one has ever photographed a hydrothermal vent in the deep Arctic before, and no manned vehicle can search there because exploring under the ice is too dangerous.

So how does it feel to be the person building the submersible that makes such a pioneering journey?

”Scary and cool,” said Singh. ”The chances of screwing up are really high, but if we find them and actually get some samples back — life in its most primitive form that has been evolving independently for 60 million years — it might be completely different from anything we know.”

Family: Wife Sandipa is a research engineer at WHOI and studies underwater communications. The couple has a son, Kurran, 9, and a daughter, Shefali, 5.

Hobbies: Team marathons. He and his students form the team ”Deep Dudes” and run the Cape Cod Marathon Relay; they won the relay division in 2001, 2002, and 2003. ”It teaches teamwork,” Singh said. ”Also, we’re running as a relay and we’re really good and you’ve still got individual people who beat our time. It’s a lesson in humility.” He also kite surfs and windsurfs and has a snowboard in his office. ”I took it up when my son began skiing.”

Alternate career: Philosopher. ”I almost finished my degree in philosophy. I still have all these books.”