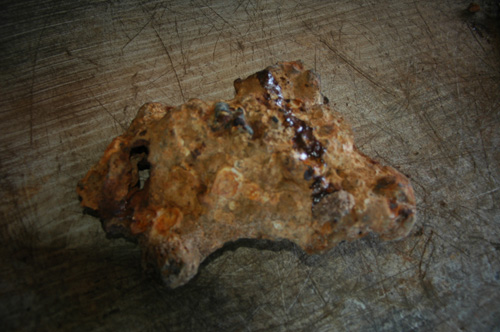 Time is running out for our medieval shipwrecks
by Nigel Baudains

THE slaughterhouse could become one of the finest maritime museums in Europe.

The island痴 two major marine archaeology research projects are entering their second phase and campaigners hope the abattoir at the Castle Emplacement will be key to their future.
Maritime Guernsey held a presentation at Castle Cornet with the aim of showing its invited guests what Guernsey had to offer in terms of marine archaeology.
The Roman wreck from the third century AD recovered from the mouth of St Peter Port Harbour in 1985 has been undergoing conservation at The Mary Rose Trust in Portsmouth ahead of its expected return to Guernsey in mid 2009.
The chairman of the Guernsey Museums Historic Wreck Committee Professor Sir Barry Cunliffe said now was the time to plan for its future.
禅he timbers will be brought over by Condor on probably the last voyage the Roman wreck will ever make,・he said. 選t痴 of such importance it will draw people to see it and the challenge now is, what are you going to do with it?・br>He said the slaughterhouse was without doubt the best site for a museum.
Bailiff Geoffrey Rowland told of his work as a trustee of the Guernsey Maritime Trust and of how Richard Keen had discovered the wreck on Christmas Day 1982.
践e was down there diving for scallops at a time when most people would have been at home sniffing turkey in the oven,・he said.
選 still hold firmly to the view that the Slaughterhouse is the ideal site to display Asterix and all that goes with it. I think it would be a marvellous site.・br>Museums director Dr Jason Monaghan said the time was right to raise the profile of Guernsey痴 maritime past in order to form a public/private partnership that could safeguard its future.
禅he publicity was great when the wreck was raised from the seabed but it all went quiet when 12 tonnes of timber was immersed in preserving wax for the next 20 years,・he said.
The second piece of research relates to the Guernsey Medieval Wrecks Project, set up by Guernsey Museums in collaboration with the University of Southampton痴 Centre for Maritime Archaeology.
Centre director Dr Jon Adams told guests how the St Peter Port seabed was of international importance in terms of marine archaeology. A 祖orridor search・of it following the discovery of the Roman wreck had uncovered at least eight more boats from medieval times.
Maritime Guernsey wants to raise funds to enable Dr Adams to keep bringing students to Guernsey several times per year to research, record and, in some cases, recover artefacts from the seabed.
But he said time was running out. While propeller wash continued to uncover more timbers, they would not be there for ever.
糎e are realists,・he said. 選t makes a wonderful dive and you see history laid out before you on the seabed, but then the biological process takes over and you have seabed but no wrecks.・